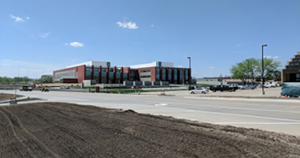 A Department of Defense History Office needed to move an aging mobile filing system located in a top secret building to a new state of the art building with minimal disruption to operations. Strategic Command’s Office of the Historian stored their top secret records in a high density mobile filing system whose manufacturer no longer made the shelving riding on its mechanically assisted mobile carriages. STRATCOM contracted Trade Products Group (TPG) to equip the new building’s furniture, fixtures and equipment (FF&E) and TPG in turn sub-contracted Advanced Filing Systems (AFS) to move the mobile filing system. AFS faced the challenge of matching up new four post shelving to the existing L&T shelving (now out of production), fit it to the mobile carriages, remove the existing rail, ramp and deck then move all the shelving and mobile components to STRATCOM’s new headquarters building. Once in the new HQ building, AFS had to match up and modify the existing four post shelving with new shelving, then refurbish and reinstall the mechanical assisted carriages and crank mechanisms. All without disrupting the Historian’s Office daily high volume workflow. 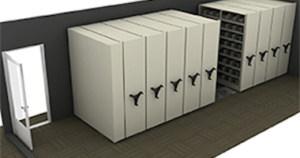 AFS worked remotely with TPG’s onsite designer for six months to design a hybrid mobile filing system incorporating the out of production Burroughs four post shelving with Aurora Storages L&T shelving. After more than a dozen revisions - AFS, TPG and STRATCOM agreed to a design that would use the majority of the existing mobile system yet incorporate enough new components to fit the new space’s design. Before AFS’s installers could tear down and move the Historian’s mobile system it had to be emptied. AFS worked with STRATCOM staff to remove and catalog the top secret files that traced the history of the United States nuclear weapons systems program. AFS installers then trucked and carted the system over a mile to the new HQ building where they reassembled it per the Configura design. To do this - Advanced Filing installers laid new carpet tiles over the plywood ramp and deck after it had leveled the rails to prevent carriage drift. Strategic Command’s History Office then reloaded its top secret media back into the refurbished mobile system. STRATCOM’s Historian was back in operation with minimal disruption - its mobile filing system overhauled and working like new.