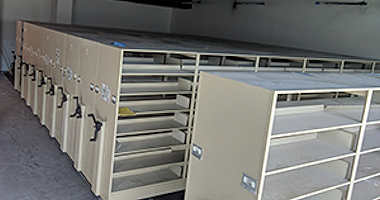 Restaurant Brands International Burger King (BK) Division planned to move their headquarters 3 blocks away to a newly renovated office building in Doral, a suburb of Miami.  Construction delays had pushed BK up against their move-out deadline and left BK staff with little time to move its High-Density Mobile Filing System. BK called Advanced Filing Systems to help it meet this fast-approaching deadline.  Advanced Filing faced multiple challenges - including the coordination and unload of BK’s 96,768 lineal filing inches (LFI) of color-coded end tab folders - before it could start disassembly. BK’s Aurora Storage 800 square foot Mobile Storage System comprised 11 each 20-foot double sided legal depth carriages.  Now faced with the challenge of moving this big mobile system in a short time - two other problems surfaced.  First - the folder move subcontractor took twice as long as expected - his antiquated file management software required him to unload all 11 carriages in series - barcoding each folder and cataloging the bankers box they went in - one at a time - a 3-day delay.  Advanced Filing had expected a filing system move in parallel - unloading and bar-coding folders from multiple carriages at the same time. Second - and with only 5 days to disassemble, move and reassemble BK’s high density storage system - BK’s staff asked for a new design to match the workflow in their new space.  Against a short deadline and unforeseen delays - Advanced Filing now had to coordinate its activities around the plumbers, carpenters, electricians and drywall subcontractors who were all working in the file room space at the same time.

Advanced Filing’s high-density storage system designers walked the space shouldered up with BK planners to design a new high-density storage system layout on the fly - sketching and calculating where the rail, ramp, deck and carriages would fit - just in time to stay in front of its ace installers; All while dancing around the other tradesmen on the jobsite.  Advanced Filing installers engineered and put into place new plywood decking and ramp to make the new design fit the new space.  Working 12 - 14 hour shifts they moved 4 truckloads of High-Density Shelving Parts - laid and grouted 4 sections of rail - and re-assembled the mobile system in time for the folders to be reloaded.  During the installation process, Advanced Filing installers sourced and replaced or fixed on the spot - broken mechanical assist cranks - from the 10-year-old Aurora high density storage system.  In addition, Advanced Filing Installers re-engineered the Double Moveable System with Cranks on both ends of the carriages to a Single Moveable System - as the last re-design placed one end of the carriages up against a wall therefore eliminating the need for a double moveable carriage. Advanced Filing staff’s ability to think on their feet - solve problems as they arose - and work long hours - enabled it to complete the move on schedule.